Obscure Robot: Tell me about a particularly challenging track. What was difficult, how did you resolve that difficulty?

Silent Strangers: There is one on Anagram2:Ire that comes to mind. Its called Parallel Being. Difficult to get the loop phasing working right. I have a compound time signature of 13/4+6/4+9/4 for my main drum track. Keeping the rhythm tight enough to keep attention, and making it sit right with a 4/4 bassline was the challenge. In the first version(s) the drum track had a compound of 13/4+5/4+/9/4. Changing it to 6/4 allowed me to work with even number that phased easier with the 4/4 bassline. If I kept it 5/4, the compound would have been 27/4 versus the 4/4 bass. The bassline would have sync'd up perfectly, every 26 bars. And the bassline needs to be tighter in that track, you’ll hear it soon ;) 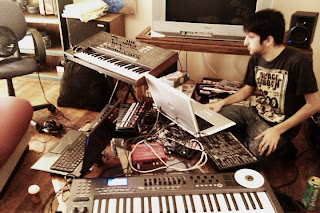 Obscure Robot: I've used compound rhythms like that specifically to keep things from syncing up, getting everything to mesh does sound like an interesting challenge.

Silent Strangers: Ever since I heard Brian Eno’s Ambient1: Music for Airports. I’ve been fascinated by loops phasing each other.

It sort of creates hidden riffs you wouldn’t write by yourself.

Obscure Robot: I got into phasing via Orbital, then Eno, and finally discovered the original Steve Reich piece

Silent Strangers: Nice, Oval really opened my brain up in a sort of textural phasing ideas, not just melodic. the Systemisch record still blows my mind. Steve Reich is a pure musical madman and genius. I can’t believe I omitted him in that huge list I gave you.

Obscure Robot: It was interesting to discover that Reich was a connecting point between Orbital and The Orb - two of the first electronic groups I actively paid attention to

Silent Strangers: haha, I wish I had a more noble introduction to electronic music.

I was in bands in high school being a keyboard player
trying to play over metal.

Then I got into cheesy industrial bands. Those modern oontz bands. Not for the music really, but for the possibilities. Then I dove deeper.

Obscure Robot: What is your relationship with technology, musically speaking?

Silent Strangers: Ahh, the affair. Technology is of the utmost importance to my musical process. Everything I release has some close relationship to the computer. I recently bought an iPhone for my birthday (I felt like a consumer whore at first HA!), but I began to see the potential I had in my pocket. From a field recorder, to sampler, to a sequencer to a synth. All within my pocket. Its contributed a lot to my new musical works. For instance, you should see my bedroom at the moment. It’s a complete mad scientist lab (as my girlfriend calls it).

I have wires and cables strewn across the room, uncompleted circuit bends littering my shelves, and a total of 4 computers running. Each has a separate job. One is a Midi Generator. The other is the synth and audio processor, and another to capture all the audio. My fourth computer, is the hub I use to keep it all in sync. I’ve got a closet full of nicknacks I’ve found to make tunes with, bent recorders, DIY controllers, and little art projects. Technology is important to my music, after all, we ARE living in the future!

Obscure Robot: Or - as William Gibson puts it - The future is already here – it's just not evenly distributed

Obscure Robot: Maybe it already happened - but the robots are software crawling around the internet.

Silent Strangers: I plan to make allies with the robots, hopefully my robotic tunes will save me.

Silent Strangers: Interesting. Depends if I get an audio interface. But in seriousness Max/MSP, and my Zoom H4. I don’t think I could get bored in Max/MSP.
Wait, If I have my Zoom h4, I don’t even need an interface!

Thats what I own, if I could have anything, I’d have a huge Buchla Modular system, and Max/MSP. Either way, Max is still in the equation.

Obscure Robot: Everything has to fit in carry-on luggage. 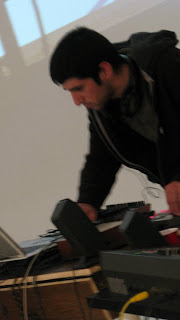 Silent Strangers: Then yes, a Zoom H4 and Max/MSP loaded on my laptop, Monome as well.

Obscure Robot: What is the most interesting thing you've done with the H4?

Silent Strangers: I walked around downtown with it strapped on a hat to get field recordings. I also built a pair of binaural mics that I often use to field record.

Everyone thought I had a taser on my head.

Obscure Robot: How did you build your binaural mics?

Silent Strangers: I followed some tutorials online. I built the pair for 4 dollars. I had an oldschool Walkman style headphone pair. I took out the speakers, flip-floped the wiring, and threw in Radioshack PC mount contact mics in place of the speaker.

re-assemble the headphone bud and put them on! And you’ve got binaurality.

Obscure Robot: I'm planning on doing something similar with a pair of Korg contact mics - mostly so I can record two channels of contact-mic at a time.

Obscure Robot: If you could give the world one idea about composition, what would it be?

Silent Strangers: Fuck being traditional with it. I can’t tell you how many times I’ve heard the "structure" of music. Why does all music have to follow the AABA format? or any format for that matter. I like to think my compositions are more of a flow then that, no true structure, just an evolving piece of music. If I don’t repeat myself once, I’m totally ok with that.

Why does all dance floor oriented music have to have an intro for a DJ to mix in?

I find working with those rules limiting.

Obscure Robot: Musicians have been rebelling against structures like that for hundreds of years, but it just won't die.

Silent Strangers: It’s the pop machine, and peoples’ lack of willingness to accept obscurity, or anything out of their tried and true format.

I was doing a performance recently

During the opening track "Focal Shift" some dude from the crowd shouted "PLAY DUBSTEP!" (we were in a small room so I could hear him perfectly)

I was shocked at the audacity of someone to request something else over a musical performance. so I challenged him.

I said "why?" he shouted back, "because it has a beat we know"

It really pissed me off, not only the gall of the guy, but the lack of experimentation on the part of the listener.

Obscure Robot: I remember when dubstep was this dark, experimental stuff. Before the wobble. It seemed like a great opportunity.

Silent Strangers: Everything seems to take on its own format. Part of the reason why I like experimental electronic music. (I refuse to use the term IDM to describe my work)

Obscure Robot: From an experimental perspective, it almost seems like naming a genre kills it. Though from a marketing perspective, naming gives it life.

Silent Strangers: The deep dark beast of marketing and promotion.

Obscure Robot: If you could give the world one idea about sound design, what would it be?

Silent Strangers: Approach your sound design as if you were making a movie. Make it theatrical, and dramatic. Use the sounds themselves to tell your story. Notation isn’t the only thing that can help convey mood.

Obscure Robot: If you could give the world one idea about marketing, what would it be?

Silent Strangers: Don’t do what I do. I feel like such an asshole every time I tell someone to listen to my music. Being on MySpace for so long cemented that. Random bands that come and go, that just add you as a friend, never heard again. Partially its the internet. Yet that's my only option. South Florida doesn't have much of an electronic scene. Or any music scene at all really, aside from club music. And I loathe club music. Only recently I’ve started promoting myself. I’m not the type of person to get all up in your face with emails and friend requests, nor am I a socialite with connections.

Silent Strangers' Christopher Lombardo was born September 12th, 1988.
He has been involved with music since an early age. His parents
enrolled him in piano lessons at age 6. In highschool he was involved
with numerous bands, playing synth and keyboards, growing weary of the
dispassionate and uninspired, he traded the human band mate, for the
cold calculation of the computer.
Started by Christopher Lombardo in 2008, Silent Strangers (Si.St) has
since gone on to produce a collection of albums, Finger Breather [self
released via torrent networks], and the four part Anagram series
(released on IDMf and Section Twentyseven netlabel).
Although commonly categorized as IDM or Experimental Electronica, the
stated goal of Silent Strangers' music is to bring non-conventional
elements into music, creating music that challenges the listen from
the mainstream conventions of modern music.
Hailed as “Complex, Sequenced and Evolving Synthetic Music”, the music
of Silent Strangers is hard to define in it's experimental nature.
Taking multiple elements of music, sound design, and live recordings,
Silent Strangers seems to create a strange fusion of digitalized
experimental music, painstakingly assembled, piece by piece into a
complex and multi-layered overture of synthetic music.
Posted by ObscureRobot at 3:55 AM