It Depends If It's Good Or Bad Chaos - Silent Strangers, Part One of Two

Obscure Robot: Do you define yourself more by your music or your day job / studies?

Silent Strangers: Both, music has always been a huge part of my life. My parents put me in piano lessons at age 6, so its a part of me. My day job/studies intertwine, I attend the Art Institute of Fort Lauderdale majoring in Visual Effects. I got into that to make animation/visual art to compliment my music. So music and my work are one in the same. 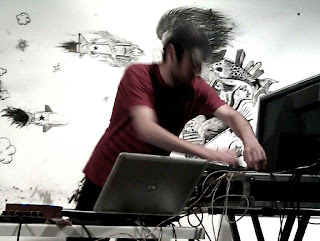 Read more »
Posted by ObscureRobot at 3:14 AM No comments:

Music For A Desert Island - Shotguns Part Four of Four

Shotguns: So, on the software tinge, I would have to go for Reaktor. Why? It's like having a warehouse full of circuits and modules that you can put together as you wish. Also, it includes 100's of friends who offer you things they've built for free.

In terms of hardware, I'm a nut for distortion and guitar pedals, so I'd have to bring a case of those and I would probably bring my trusty MS2000B. I love this synth. It's technically not the "best" synth I own, but it feels like an extension of my fingers and it just makes a lot of sense for me.

Read more »
Posted by ObscureRobot at 4:48 AM No comments:

Obscure Robot: Tell me about a particularly difficult track?

Shotguns: On the studio tip. I've got a few consecutive riffs and melodies that quite a few people have heard in at least 15 different forms. People only know it by the working name and it's actually one of my most appreciated tunes - but it didn’t exist in final recorded form. I couldn’t seem to get it right. I've tried it in every single way I could imagine.

But you know what happened yesterday? I had a decent draft of a track going. It was alright, but it was more of an album track, if you catch my drift? Well, I realized that it was in the key of F minor, so I casually tried to freestyle that one melody on top. It sounded pretty damn good, so I kept going with the other riffs and melodies and ended up bouncing it down. I played it to a few people today and they were over the moon.

Read more »
Posted by ObscureRobot at 4:31 AM No comments:

Why Does Guns & Roses Suck So Much? - Shotguns Part Two of Four

Obscure Robot: Taking a step back - who do you consider to be your biggest influences?

Shotguns: Oh, wow.. That is a tough one to answer, but ultimately I am a sum of what I like. As asinine as it might sounds - I basically took what I liked as a kid and ran with it. I grew up playing a lot of old school game consoles. I also grew up listening to hip hop tapes, so I guess that's where sampling and the appreciation of our musical roots came from. Then when I figured out that my guitar pedals would work with any input - that was another ground breaking thing in my life... Then later in my life, I found out that people actually exploit all these things in their musical endeavors. I already did these things, but the 8-bit music scene, more alternative hip hop producers and the noise scene showed me that there were people out there already doing what I did and I found not one, but several places to belong.

Music is his Day Job - Shotguns Part One of Four

Obscure Robot: Do you define yourself more by your music or your day job?

Shotguns: This is an interesting one for me, since I've chosen since day one to make music "my everything". It's not just simply a case of me figuring out something that I can exploit to make my day job - I genuinely don't want to do anything else with my life. However, since my interest in production is legit, I also do it on my "spare time" (if such even actually exists) and then I tend to explore genres and learn things from scenes and eras in music that are now "forgotten". So in one sense I define myself as a musician, but in another sense I am always going to be about exploring and interpreting things - so this is a tough one to answer. I am going to tackle it like this; If someone works a day job and still practices with their go-nowhere-band 4 days a night, they're a still musician, right? Well, I would most certainly do that even if I spent my days working at Mickey D's. While trying my best to not sound pretentious - I'm a musician.

Read more »
Posted by ObscureRobot at 12:01 AM No comments: